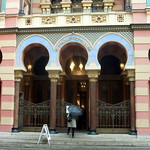 Jubilee Synagogue (Czech: Jubilejní synagoga), also known as the Jerusalem Synagogue, is a synagogue in Prague, Czech Republic. It is also known as the Jerusalem Synagogue because of its location on Jerusalem Street. It was built in 1906, designed by Wilhelm Stiassny and named in honor of the silver Jubilee of Emperor Franz Joseph I of Austria. The synagogue is designed in Moorish Revival form with Art Nouveau decoration, especially in the interior. It was lately renovated and still serves religious purposes. Since Czechoslovakia became independent in 1918, it has been called the Jerusalem Synagogue as the name Jubilee Synagogue referred to the anniversary of the rule of Franz Joseph I in the defeated Austro-Hungarian Monarchy.

The synagogue preserves inscribed plaques removed from the former Zigeuner synagogue, demolished by the urban renewal campaign that was the cause of the building of the Jubilee synagogue.

The facade and form of the synagogue are a hybridized blend of Moorish Revival and art nouveau, with Horseshoe arches on the facade and on the interior columns supporting the women's galleries in a three-bay building. The Mudéjar red-and-white coursing of the stone facade is particularly striking. Inside, the Moorish elements are overlaid with brilliantly painted Art nouveau patterning.

After a century of being open to the public as a house of worship, on 1 April 2008 the Jubilee Synagogue began opening its doors on a regular basis to tourists and aficionados of historic architecture.