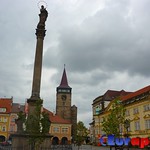 Jicin
Things to see at Jicin:
A bucket list of the top sights at Jicin, ordered by popularity.

Jičín (Czech pronunciation: [ˈjɪtʃiːn]; German: Titschein, Gitschin or Jitschin; Latin: Gitmiacinum, Gitzinum; Polish: Jiczyn) is a town in the Hradec Králové Region of the Czech Republic. It lies approximately 85 km northeast of Prague in the scenic region of the Bohemian Paradise (Český ráj) under the Prachov Rocks (Prachovské skály).

Jičín has been declared a Municipal Reserve (městská památková rezervace) because of its well-preserved historical center, built around a rectangular square with a regular Gothic street layout, remnants of fortifications and arcade Renaissance and Baroque houses. The town is also connected with the popular fairy-tale character of Rumcajs.

The Battle of Gitschin was fought nearby during the Austro-Prussian War of 1866.