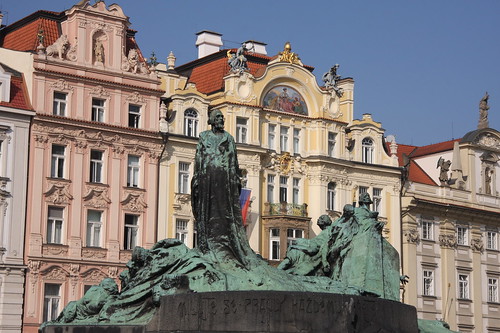 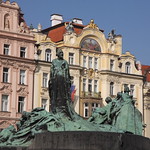 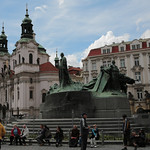 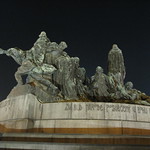 The Jan Hus Memorial stands at one end of Old Town Square, Prague in the Czech Republic. The huge monument depicts victorious Hussite warriors and Protestants who were forced into exile 200 years after Hus, and a young mother who symbolises national rebirth. The monument was so large that the sculptor designed and built his own villa and studio where the work could be carried out. It was unveiled in 1915 to commemorate the 500th anniversary of Jan Hus' martyrdom. The memorial was designed by Ladislav Šaloun and paid for solely by public donations.

Born in 1369, Hus became an influential religious thinker, philosopher, and reformer in Prague. He was a key predecessor to the Protestant movement of the sixteenth century. In his works he criticized religious moral decay of the Catholic Church. Accordingly, the Czech patriot Hus believed that mass should be given in the vernacular, or local language, rather than in Latin. He was inspired by the teachings of John Wycliffe. In the following century, Hus was followed by many other reformers - e.g. Martin Luther, John Calvin and Huldrych Zwingli. Hus was ultimately condemned by the Council of Constance and burned at the stake in 1415. This led to the Hussite Wars.