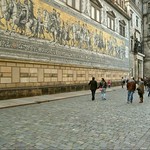 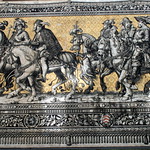 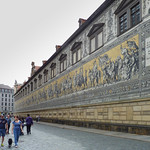 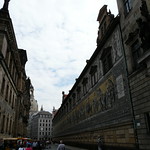 The Fürstenzug (English: Procession of Princes) in Dresden, Germany, is a large mural of a mounted procession of the rulers of Saxony. It was originally painted between 1871 and 1876 to celebrate the 800th anniversary of the Wettin Dynasty, Saxony's ruling family. In order to make the work weatherproof, it was replaced with approximately 23,000 Meissen porcelain tiles between 1904 and 1907. With a length of 102 metres (335 ft), it is known as the largest porcelain artwork in the world. The mural displays the ancestral portraits of the 35 margraves, electors, dukes and kings of the House of Wettin between 1127 and 1904.

The Fürstenzug is located on the outer wall of the Stallhof (Stables Courtyard) of Dresden Castle.