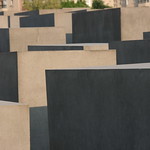 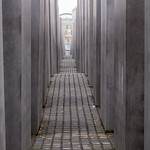 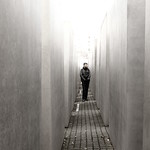 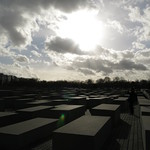 Memorial to the Murdered Jews of Europe

The Memorial to the Murdered Jews of Europe (German: Denkmal für die ermordeten Juden Europas), also known as the Holocaust Memorial (German: Holocaust-Mahnmal), is a memorial in Berlin to the Jewish victims of the Holocaust, designed by architect Peter Eisenman and engineer Buro Happold. It consists of a 19,000 m2 (4.7-acre) site covered with 2,711 concrete slabs or "stelae", arranged in a grid pattern on a sloping field. The stelae are 2.38 m (7 ft 10 in) long, 0.95 m (3 ft 1 in) wide and vary in height from 0.2 to 4.8 m (7.9 in to 15 ft 9.0 in). They are organized in rows, 54 of them going north–south, and 87 heading east–west at right angles but set slightly askew. An attached underground "Place of Information" (German: Ort der Information) holds the names of all known Jewish Holocaust victims, obtained from the Israeli museum Yad Vashem.

Building began on April 1, 2003, and was finished on December 15, 2004. It was inaugurated on May 10, 2005, sixty years after the end of World War II, and opened to the public two days later. It is located one block south of the Brandenburg Gate, in the Friedrichstadt neighborhood. The cost of construction was approximately €25 million.