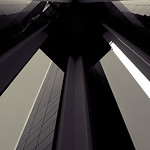 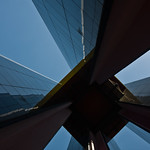 A carillon (US /ˈkærəlɑːn/ or UK /kəˈrɪljən/; French: [kaʁijɔ̃]) is a musical instrument that is typically housed in the bell tower (belfry) of a church or municipal building. The instrument consists of at least 23 cast bronze, cup-shaped bells, which are played serially to produce a melody, or sounded together to play a chord. A traditional manual carillon is played by striking a keyboard — the stick-like keys of which are called batons — with the fists, and by pressing the keys of a pedal keyboard with the feet. The keys mechanically activate levers and wires that connect to metal clappers that strike the inside of the bells, allowing the performer on the bells, or carillonneur/carillonist to vary the intensity of the note according to the force applied to the key.

Although unusual, real carillons have occasionally been fitted to theatre organs (instead of the metal bars or chimes more often used in simulation), such as the Christie organ installed at the Regal Cinema, Marble Arch, in London.

The carillon is the heaviest of all extant musical instruments.

In German, a carillon is also called a Glockenspiel; while the percussion instrument called a "glockenspiel" by English speakers is often called a carillon in French.