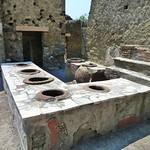 In the ancient Greco-Roman world, a thermopolium (plural thermopolia), from Greek θερμοπώλιον, i.e. cook-shop, literally "a place where (something) hot is sold", was a commercial establishment where it was possible to purchase ready-to-eat food. The forerunner of today's restaurant, the items served at the thermopolia are sometimes compared to modern fast food. These places were mainly used by the poor or those who simply could not afford a private kitchen, sometimes leading them to be scorned by the upper class.