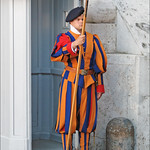 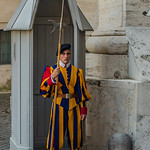 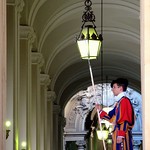 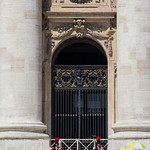 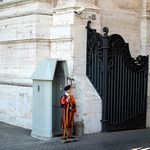 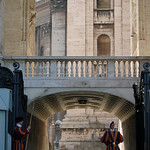 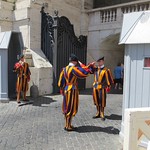 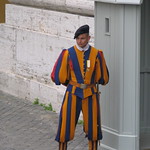 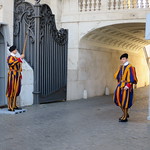 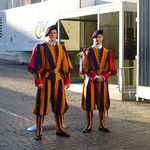 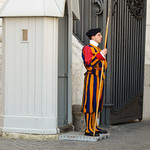 Swiss Guards (Latin: Custodes Helvetici; Italian: Guardie Svizzere) are the Swiss soldiers who have served as guards at foreign European courts since the late 15th century. In addition to small household and palace units, Swiss mercenary regiments have served as regular line troops in various armies; notably those of France, Spain and Naples (see Swiss mercenaries). The Swiss were famous mercenaries for hundreds of years. Since Switzerland was a poor country, young men often sought their fortunes abroad. Swiss troops had a reputation for discipline and loyalty, and for employing revolutionary battle tactics such as the pike square. They were considered the most effective mercenaries of the 15th century, until their battle-drill was improved upon by the German Landsknechte. At the Battle of Marignano (1515), the Landsknecht in French service defeated the Swiss pikemen.

The earliest Swiss guard unit to be established on a permanent basis was the Hundred Swiss (Cent Suisses), which served at the French court from 1490 to 1817. This small force was complemented in 1567 by a Swiss Guards regiment. In the 18th and early 19th centuries several other Swiss Guard units existed for periods in various European courts. The Papal Swiss Guard (now located in Vatican City) was founded in 1506 and is the only extant Swiss Guard. It is one of the oldest military units in the world.

Currently, the name Swiss Guard generally refers to the Pontifical Swiss Guard of the Holy See stationed at the Vatican in Rome. The Papal Swiss Guard has a bodyguard-like role. Recruits to the guards must be Catholic, single males with Swiss citizenship who have completed basic training with the Swiss military and can obtain certificates of good conduct. Recruits must have a professional degree or high school diploma and must be between 19 and 30 years of age and at least 174 cm (5 ft 8.5 in) tall. The official dress uniform is of blue, red, orange and yellow with a distinctly Renaissance appearance. After the 13 May 1981 assassination attempt on Pope John Paul II by gunman Mehmet Ali Ağca, a much stronger emphasis has been placed on the guard's non-ceremonial roles, and has seen enhanced training in unarmed combat and small arms. The Swiss Guard uses traditional weapons, such as a sword and a halberd, as well as modern weapons such as the SIG P220 and Glock 19 pistols, the Steyr TMP machine pistol and submachine guns like the Heckler & Koch MP5A3.