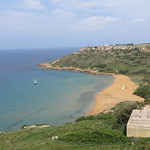 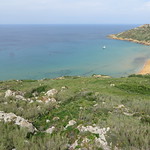 Ramla Bay
Things to see at Ramla Bay:
A bucket list of the top sights at Ramla Bay, ordered by popularity.

This article is about Ramla Bay in Gozo. There is another Ramla Bay near Marfa, Mellieha (Island of Malta).

Ramla Bay is located at the bottom of a rich and fertile valley on the northern side of the island of Gozo. Gozo is one of the Maltese islands. The village of Xagħra, located on one of the hills of Gozo, overlooks this valley. It is about a forty-minute walk from Xagħra to the bay. The bay can also be reached from the village of Nadur. Bus service to the beach is very regular. The terraced walls built by the farmers give the valley an appearance of a quilt when viewed from the high ridges surrounding it.

The beach is quite wide and sandy. It is a particularly golden-reddish sand which makes this beach different from all others in Gozo and Malta. Its real Maltese name is Ir-Ramla l-Ħamra — the Red Sandy Beach. The area around the beach is quite interesting and provides some very rich historical treasures. Roman remains lie beneath the sand and the famous Calypso Cave overlooks the western side of the beach.

The beach is popular with both Maltese residents and tourists, and part of it is a Natura 2000 site. There are two cantinas on the beach and several ice cream kiosks. The beach is surrounded by hillsides on both the west and east where many local farmers have gardens and orchards. A sandy path on the eastern hillside leads up to the Calypso Cave.

According to tradition, this is the cave referred to by Homer in The Odyssey. The nymph Calypso lived in this cave and it is where she entertained Ulysses for seven years before he resumed his journey. Calypso Cave is in fact a series of caves and, according to some, these extend right down to the sea.