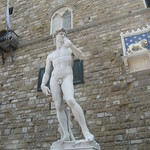 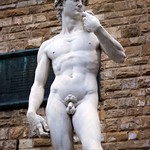 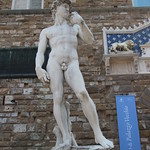 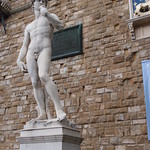 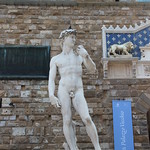 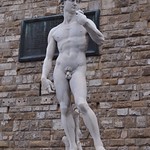 David (Italian pronunciation: [ˈdaːvid]) is a masterpiece of Renaissance sculpture created between 1501 and 1504 by Michelangelo.

It is a 5.17-metre (17.0 ft) marble statue of a standing male nude. The statue represents the Biblical hero David, a favoured subject in the art of Florence. Originally commissioned as one of a series of statues of prophets to be positioned along the roofline of the east end of Florence Cathedral, the statue was placed instead in a public square, outside the Palazzo della Signoria, the seat of civic government in Florence, where it was unveiled on 8 September 1504.

Because of the nature of the hero it represented, the statue soon came to symbolize the defense of civil liberties embodied in the Republic of Florence, an independent city-state threatened on all sides by more powerful rival states and by the hegemony of the Medici family. The eyes of David, with a warning glare, were turned towards Rome. The statue was moved to the Galleria dell'Accademia, Florence, in 1873, and later replaced at the original location by a replica.