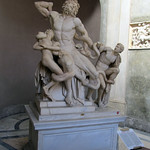 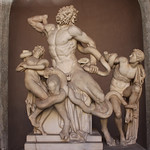 Laocoön (/leɪˈɒkoʊˌɒn, -kəˌwɒn/; Ancient Greek: Λαοκόων, IPA: [laokóɔːn]), the son of Acoetes, is a figure in Greek and Roman mythology and the Epic Cycle. He was a Trojan priest who was attacked, with his two sons, by giant serpents sent by the gods. Though not mentioned by Homer, the story of Laocoön had been the subject of a tragedy, now lost, by Sophocles and was mentioned by other Greek writers, though the events around the attack by the serpents vary considerably. The most famous account of these is now in Virgil's Aeneid where Laocoön was a priest of Poseidon (or Neptune for the Romans), who was killed with both his sons after attempting to expose the ruse of the Trojan Horse by striking it with a spear.

Virgil gives Laocoön the famous line "Equō nē crēdite, Teucrī / Quidquid id est, timeō Danaōs et dōna ferentēs", or "Do not trust the Horse, Trojans / Whatever it is, I fear the Greeks even bearing gifts." This line is the source of the saying: "Beware of Greeks bearing gifts."

In Sophocles, however, he was a priest of Apollo, who should have been celibate but had married. The serpents killed only the two sons, leaving Laocoön himself alive to suffer. In other versions he was killed for having committed an impiety by making love with his wife in the presence of a cult image in a sanctuary, or simply making a sacrifice in the temple with his wife present. In this second group of versions, the snakes were sent by Poseidon and in the first by Poseidon and Athena, or Apollo, and the deaths were interpreted by the Trojans as proof that the horse was a sacred object. The two versions have rather different morals: Laocoön was either punished for doing wrong, or for being right.