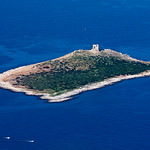 Despite its name, which can be translated in English as "The Island of Women", the town is located in mainland Sicily; the "island" the name refers to lies off the coast near the town, and is currently uninhabited. The etymology of the name is uncertain: a story claims the origins of the name from a females' only prison supposedly located in the island in the 16th century. A more reliable claim is that in the 19th century, a plague or sickness occurred in the town and the women and children were sent to the offshore island until it had passed.

Isola delle Femmine is a sister city with Pittsburg, California. The same fisherman statue that sits in Isola's Piazza di Pittsburg can be seen in downtown Pittsburg with the names of the first settlers from Isola to Pittsburg. Many of the families descended from the men on the plaque are extant in both cities, and their surnames can also be found in the records of the church at the center of town.

The parents of Joe, Vince, and Dom DiMaggio were from Isola delle Femmine.