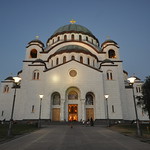 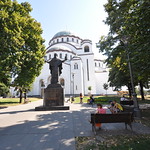 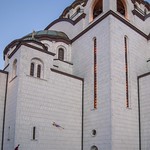 The Church of Saint Sava (Serbian: Храм светог Саве/Hram svetog Save) is a Serbian Orthodox church located on the Vračar plateau in Belgrade. It is one of the largest Orthodox churches in the world and ranks among the largest church buildings in the world. The church is dedicated to Saint Sava, the founder of the Serbian Orthodox Church and an important figure in medieval Serbia. It is built on the Vračar plateau, on the location where his remains were burned in 1595 by Ottoman Grand Vizier Sinan Pasha. From its location, it dominates Belgrade's cityscape, and is perhaps the most monumental building in the city. The building of the church structure is being financed exclusively by donations. The parish home is nearby, as will be the planned patriarchal building.