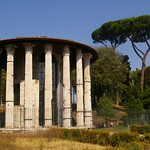 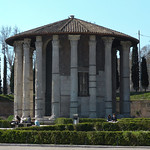 The Temple of Hercules Victor ('Hercules the Winner') (Italian: Tempio di Ercole Vincitore) or Hercules Olivarius is an ancient edifice located in Piazza Bocca della Verità, in the area of the Forum Boarium close to the Tiber in Rome (Italy). It is a monopteros, a round temple of Greek 'peripteral' design completely encircled by a colonnade. This layout caused it to be mistaken for a temple of Vesta until it was correctly identified by Napoleon's Prefect of Rome, Camille de Tournon.

Dating from the later 2nd century BC, and perhaps erected by L. Mummius Achaicus, conqueror of the Achaeans and destroyer of Corinth, the temple is 14.8 m in diameter and consists of a circular cella within a concentric ring of twenty Corinthian columns 10.66 m tall, resting on a tuff foundation. These elements supported an architrave and roof, which have disappeared. The original wall of the cella, built of travertine and marble blocks, and nineteen of the originally twenty columns remain but the current tile roof was added later. Palladio's published reconstruction suggested a dome, though this was apparently erroneous. The temple is the earliest surviving marble building in Rome.

Its major literary sources are two almost identical passages, one in Servius' commentary on the Aeneid (viii.363) and the other in Macrobius Saturnalia. Though Servius mentions that aedes duae sunt, "there are two sacred temples", the earliest Roman calendars mention but one festival, on 13 August, to Hercules Victor and Hercules Invictus interchangeably.

By 1132 the temple had been converted to a church, known as Santo Stefano alle Carozze (St. Stephen 'of the carriages'). Additional restorations (and a fresco over the altar) were made in 1475. A plaque in the floor was dedicated by Sixtus IV. In the 17th century the church was rededicated, to Santa Maria del Sole ("St. Mary of the Sun").

This temple, long considered from its circular structure to have been a temple of Vesta, and the Temple of Vesta in Tivoli was an inspiration for Bramante's Tempietto and other High Renaissance churches of centralized plan.

Despite (or perhaps due to) the Forum Boarium's role as the cattle-market for ancient Rome, the Temple of Hercules is the subject of a folk belief claiming that neither flies nor dogs will enter the holy place.

The temple was recognized officially as an ancient monument in 1935 and restored at last in 1996.