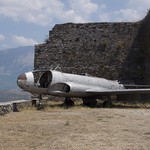 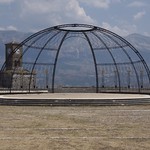 Gjirokastër is a town and a municipality in southern Albania. Lying in the historical region of Epirus, it is the capital of Gjirokastër County. Its old town is inscribed on the World Heritage List as "a rare example of a well-preserved Ottoman town, built by farmers of large estate." Gjirokastër is situated in a valley between the Gjerë mountains and the Drino River, at 300 m (984 ft) above sea level. The city is overlooked by the Gjirokastër Castle where Gjirokaster National Folklore Festival is held every five years. Gjirokastër is the birthplace of former Albanian communist leader Enver Hoxha and notable writer Ismail Kadare. It hosts the Eqerem Çabej University.

The city appears in the historical record in 1336 by its Greek name, Argyrokastro (Αργυρόκαστρο, often written Argyrocastro or Argyro-Castro), as part of the Byzantine Empire. It later became the center of the local principality under the Albanian lord, Gjon Zenebishi (1373-1417), before falling under Ottoman Empire rule for the next five centuries. Taken by the Greek Army during the Balkan Wars on account of its large Greek population, it was eventually incorporated into the newly independent state of Albania in 1913. This proved highly unpopular with the local Greek population, who rebelled and after several months of guerilla warfare established the short-lived Autonomous Republic of Northern Epirus with Gjirokaster as its capital in 1914. It was definitively awarded to Albania in 1921. In more recent years, the city witnessed anti-government protests that lead to major political instability in Albania (1997).

Alongside Albanians, the city is home to a substantial Greek minority. Gjirokastër, together with Saranda, is considered one of the centers of the Greek community in Albania, and there is a Greek consulate in town.