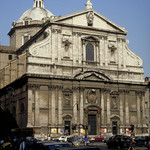 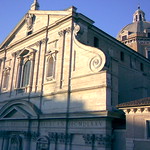 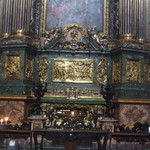 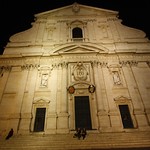 The Church of the Gesù (Italian: Chiesa del Gesù; Italian pronunciation: [ˈkjɛːza del dʒeˈzu]) is the mother church of the Society of Jesus (Jesuits), a Catholic religious order. Officially named Chiesa del Santissimo Nome di Gesù all'Argentina (English: Church of the Most Holy Name of Jesus at the "Argentina"), its facade is "the first truly baroque façade", introducing the baroque style into architecture. The church served as model for innumerable Jesuit churches all over the world, especially in the Americas. The Church of the Gesù is located in the Piazza del Gesù in Rome.

First conceived in 1551 by Saint Ignatius of Loyola, the founder of the Jesuits Society of Jesus, and active during the Protestant Reformation and the subsequent Catholic Reformation, the Gesù was also the home of the Superior General of the Society of Jesus until the suppression of the order in 1773. The church having been subsequently regained by the Jesuits, the adjacent palazzo is now a residence for Jesuit scholars from around the world studying at the Gregorian University in preparation for ordination to the priesthood.