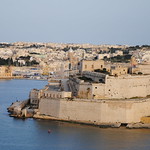 Fort Saint Angelo (Maltese: Forti Sant'Anġlu or Fortizza Sant'Anġlu) is a large bastioned fort in Birgu, Malta, located at the centre of the Grand Harbour. The fort was originally a castle, and its date of construction is not known. It definitely existed by the 13th century, and in the Middle Ages it was known as the Castrum Maris. It was rebuilt by the Order of Saint John as Fort Saint Angelo in the 16th and 17th centuries, and it played an important role in the Great Siege of Malta of 1565. The fort was then used by the British as a stone frigate, and was known as HMS Egmont or later HMS St Angelo. It was last used for military purposes in 1979, and in 1998 part of it was handed back to the SMOM. The fort is currently being restored.

Fort St. Angelo has been on Malta's tentative list of UNESCO World Heritage Sites since 1998, as part of the Knights' Fortifications around the Harbours of Malta.