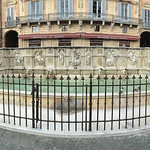 The Fonte Gaia is a monumental fountain located in the Piazza del Campo in the center of Siena, Italy.

The first fountain in the Piazza del Campo was first completed in 1342, after much hydraulic construction led water to the site. Underground pipes brought water to the site from 25 kilometers away. Legend holds that the fountain was met with much joy, and thus the name Gaia or joyous. Others suggest the term Gaia refers to the Latin term for "bride", and that the fountain was dedicated to the bride of God and patron of Siena, the Virgin Mary. The fountains plates and statues conflate Roman matrons, cardinal virtues, with a central depiction of Mary, though curiously framed by stories of Genesis.

In 1419, the fountain had the present decorative frame constructed by Jacopo della Quercia. In 1858, the original marble panels were replaced by copies sculpted by Tito Sarrocchi, under the supervision of the architect Giuseppe Partini. The side reliefs depict episodes from Genesis: The Creation of Adam and The Flight from the Garden of Eden. The wolves spouting water, and representing the mother-wolf of Remus and Romulus, formed part of the reconstructed fountain. Two nude female figures once adorned the front two columns, traditionally believed to represent Rea Silvia and Acca Larentia, in celebration of Siena’s supposed links to ancient Rome, these were not added in the reconstruction but can be viewed along with the original panels at a museum at Santa Maria della Scala, the old hospital overlooking the Piazza del Duomo. The long section of the fountain is adorned at the centre with a Madonna and Child, surrounded by allegories of the Virtues.