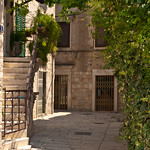 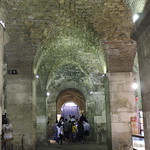 Diocletian's Palace (Croatian: Dioklecijanova palača, pronounced [diɔklɛt͡sijǎːnɔʋa pǎlat͡ʃa]) is an ancient palace built by the Roman emperor Diocletian at the turn of the fourth century AD, that today forms about half the old town and city center of Split, in Croatia. While it is referred to as a "palace" because of its intended use as the retirement residence of Diocletian, the term can be misleading as the structure is massive and more resembles a large fortress: about half of it was for Diocletian's personal use, and the rest housed the military garrison.

Diocletian built the massive palace in preparation for his retirement on 1 May 305 AD. It lies in a bay on the south side of a short peninsula running out from the Dalmatian coast, four miles from Salona, the capital of the Roman province of Dalmatia. The terrain slopes gently seaward and is typical karst, consisting of low limestone ridges running east to west with marl in the clefts between them.