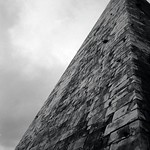 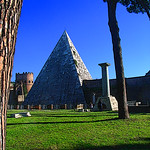 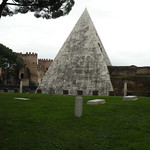 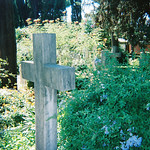 The Pyramid of Cestius (in Italian, Piramide di Caio Cestio or Piramide Cestia) is an ancient pyramid in Rome, Italy, near the Porta San Paolo and the Protestant Cemetery. It stands at a fork between two ancient roads, the Via Ostiensis and another road that ran west to the Tiber along the approximate line of the modern Via della Marmorata. Due to its incorporation into the city's fortifications, it is today one of the best-preserved ancient buildings in Rome.