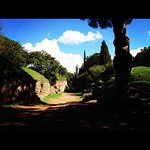 Cerveteri
Things to see at Cerveteri:
A bucket list of the top sights at Cerveteri, ordered by popularity.

Cerveteri [tʃerˈvɛːteri] is a town and comune of the northern Lazio, in the province of Rome. Originally known as Caere (also Caisra and Cisra in Etruscan, Agylla, Άγυλλα in Greek), it is famous for a number of Etruscan necropoleis.

Cerveteri is believed to have been one of the city-states of the Etruscan League and at its height, around 600 BC, its population was perhaps around 25,000 - 40,000 people.