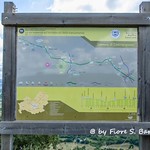 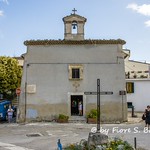 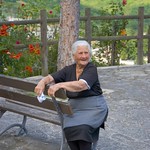 Castropignano is a comune (municipality) in the Province of Campobasso in the Italian region Molise, located about 10 kilometres (6 mi) northwest of Campobasso.

It is home to a medieval castle, the Castello d'Evoli, built in the mid-14th century, perhaps over the remains of a Samnite fortress.

The history book written by Raffaele Sardella states that the beginning of Castropignano occurred during the Iron Age (1000 BC) when two tribes occupied two hills because it provided better defense and security. The two initial tribes occupied the hills that are now called "Colle" and "Trivecchia". At the place of the castle was a fortress where the population would gather during perilous times or times when the defence requirements reached to an extreme level. It was quite common for the Italic peoples of this age to live in open villages, to which a fortress (usually a hill-top with a rough fence of pointed stakes) might be attached as a place of refuge. Two main branches of dialects developed, the "Umbrian" of the north and the "Oscan" of the southern Apennine districts.

During the time of the Roman Republic and the Samnites, Castropignano was surrounded by a wall with a primary and a secondary entrance. The Samnites were people of central southern Italy, a hardy race of shepherds and farmers with no marked differences in wealth and consequently without a distinct governing class. The Romans had at least three wars with these people of the mountains and they learned some hard lessons, in fact they had to reform their military methods in order to overtake and claim a victory in the year 290. The first Samnite war (343–341 BC) resulted in Roman control of northern Campania; the second (327–321, 316–304 BC) prevented Samnite control of Apulia, Lucania, and southern Campania; the third (298–290 BC) involved and decided the destiny of all peninsular Italy. The Samnites continued to fight in the Social War and the Civil against Sulla (138–78 BC), a Roman general, provincial governor and consul who was proclaimed dictator and was deposed three years later. He slaughtered all the Samnite he could. He, after having numerous battles observed that the Samnite, almost without exception, remained in one body, and with one sole intention, so that they had even marched upon Rome itself, given them battle under the walls, and as he had issued orders to take no prisoners, many of them were cut to pieces on the field, while the remainder, said to be about three to four thousand men, who threw up their arms, were led off to the Villa Publica in the Campus Martius, and were shut in; three days after soldiers were sent in who massacred the whole; and when Sulla drew up his conscription list, he did not rest satisfied until he had destroyed, or driven from Italy, every one who bore a Samnite name. To those who reproached him for his animosity, he replied that he had learned by experience that not a single Roman could rest in peace so long as any of the Samnites survived.

Written accounts in the history of the area make it clear that during the 80 years of war between the Samnites and the Romans the area around the location of the town was found to be at the centre of destruction and many bloody battles. During the year 294 BC the town had the Roman name, "Palumbinum" ( This reference was found in Book 10, Chapter 45 of the Story of Rome by, Tito Livio After unifying Italy Augustus ( 63 BC – 14 AD), Rome's first emperor divided it into eleven administrative districts. One of the districts [known today as eastern Campania, Molise; Abruzzo ] was inhabited by Samnites, Fretani, Marrucini, Marsi, Pelogni, Aequiculli, Vestini and Sabini. The Castropignano area was occupied by a Roman Consulate called Lucio Spurio Carvillo, whose Latin name was Castrum or Castra Pineani. The Romans brought slavery and taxes. For years after the coming of Jesus Christ, the Romans continued to bring fear to the Samnites and for that reason they frequently kept in hiding. This was powerfully demonstrated on the walls of the Roman Sepino (Atilia di Sepino). Except for the Samnites, no one was capable of an attack on Imperial Rome during the first century AD. A Samnite named Pentri, because of his strength and courage as a gladiator and later because of his military contribution to the extension of the Roman Empire, was made a citizen of Rome.

With all probability, our faith in Christ Jesus came through our ancestors directly from Rome because half of the Samnite and Roman legions had converted to the new religion. The barbaric states of Longobardy, Normans, and Bulgarians had difficulty attracting themselves to any union because of religious differences. Since the year 1000/1200 the Castropignano area was directly connected to the Holy See and as time passed it became a dependent member of the Diocese of Trivento.

After the fall of the Roman Empire (around 476 AD), Castropignano was inhabited by a colony of Bulgarians who were similar in behaviour and conduct to the Slavs and Czechs. During that time a Bulgarian chief priest lived in the town and this influence from outside the town created a new class of people. Whoever entered the town from a neighboring town was welcome and was exempted from punishment for no matter what offense that he had done in the other town. For this reason the Bulgarians dominated Castropignano and at that time people referred to the town as "Castropignano of the Bulgarians who triumph with all the bad habits of hoodlums". The result was that during the eight centuries to the year 1000 two languages were spoken in Castropignano, Italian dialect and Bulgarian.

In the year 1114 a person named Gulielmo became known. His last name was not known because in those days it was customary to drop the family name and then to become known by the place of origin. For example, Leonardo da Vinci meant Leonardo from the town of Vinci. Gulielmo's first male descendant was called "Vito di Castropignano" or Vito of Castropignano. Vito had two daughters. Tomasia was married to Petrillo Minutolo and the second daughter named Claricia was married to Giovanni d'Evoli, baron of Frosolone. An argument developed between Minutolo and d'Evoli. Eventually d'Evoli paid Minutolo off so that he could become the baron of Castropignano. The d'Evoli family had obtained the title of Duke of Castropignano. During the nine centuries of their tenure Castropignano was central to their control and exploitation of the tratturo transhumance passage of herds from Southern lowland winter pastures to upland Apennine pastures further North. Following the restoration of the Bourbon monarchy in 1815, the recognition of the communes established in the preceding Napoleonic period brought the d'Evoli to an end.