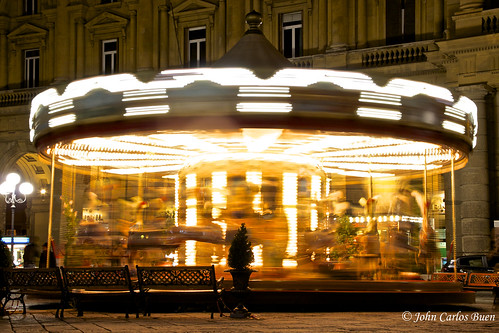 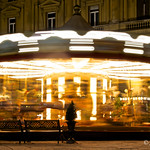 A carousel (American English: from French carrousel and Italian carosello), roundabout (British English), or merry-go-round, is an amusement ride consisting of a rotating circular platform with seats for riders. The "seats" are traditionally in the form of rows of wooden horses or other animals mounted on posts, many of which are moved up and down by gearwork to simulate galloping, to the accompaniment of looped circus music. This leads to one of the alternative names in American English, the galloper. Other popular names are jumper, horseabout and flying horses.

Carousels are commonly populated with horses, each horse weighing roughly 100 lbs (45 kg), but may include diverse varieties of mounts, like pigs, zebras, tigers, or mythological creatures such as dragons or unicorns. Sometimes, chairlike or benchlike seats are used as well, and occasionally mounts can be shaped like airplanes or cars.

In a playground, a roundabout or merry-go-round is usually a simple, child-powered rotating platform with bars or handles to which children can cling while riding.