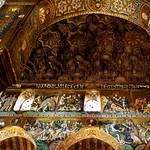 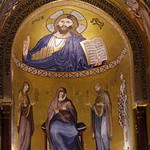 The Palatine Chapel (Italian: Cappella Palatina), is the royal chapel of the Norman kings of Sicily situated on the ground floor at the center of the Palazzo Reale in Palermo, southern Italy.

Also referred to as a Palace church or Palace chapel, it was commissioned by Roger II of Sicily in 1132 to be built upon an older chapel (now the crypt) constructed around 1080. It took eight years to build, receiving a royal charter the same year, with the mosaics being only partially finished by 1143. The sanctuary, dedicated to Saint Peter, is reminiscent of a domed basilica. It has three apses, as is usual in Byzantine architecture, with six pointed arches (three on each side of the central nave) resting on recycled classical columns.