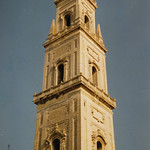 A bell tower is a tower that contains one or more bells, or that is designed to hold bells, even if it has none. In the European tradition, such a tower most commonly serves as part of a church and contains church bells. In such cases the bell tower is located at the western end of the church. Modern bell towers often contain carillons.

The Italian term campanile (/ˌkæmpəˈniːliː/; Italian pronunciation: [kampaˈniːle]), deriving from the word 'campana' meaning bell, is synonymous with 'bell tower'; in English it tends to be used to refer to freestanding bell towers.

A bell tower may also be called a belfry, though this term may also refer to the substructure that houses the bells rather than the tower as a whole.

Old bell towers may be kept for their historic or iconic value, though in countries with a strong campanological tradition they often continue to serve their original purposes as well.

Bell towers are common in China and neighbouring countries, where they may appear both as part of a temple complex and as an independent civic building. The tallest free-standing bell tower in the world, approximately 110 m, is the Joseph Chamberlain Memorial Clock Tower, located at the University of Birmingham, UK.