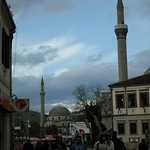 Bitola
Things to see at Bitola:
A bucket list of the top sights at Bitola, ordered by popularity.

Bitola (Macedonian: Битола [ˈbitɔɫa] known also by several alternative names) is a city in the southwestern part of the Republic of Macedonia. The city is an administrative, cultural, industrial, commercial, and educational centre. It is located in the southern part of the Pelagonia valley, surrounded by the Baba, Nidže and Kajmakčalan mountain ranges, 14 kilometres (9 miles) north of the Medžitlija-Níki border crossing with Greece. It is an important junction connecting the south of the Adriatic Sea with the Aegean Sea and Central Europe. It has been known since the Ottoman period as "the city of the consuls", since many European countries have consulates in Bitola. According to the 2002 census, Bitola is the second largest city in the country. Bitola is also the seat of the Bitola Municipality. Bitola is one of the oldest cities on the territory of the Republic of Macedonia. It was founded as Heraclea Lyncestis in the middle of the 4th century BC by Philip II of Macedon. During the Ottoman rule the city was the last capital of Ottoman Rumelia.