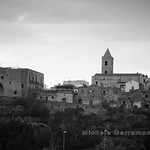 Bernalda is a town and comune in the province of Matera, in the Southern Italian region of Basilicata. The frazione of Metaponto is the site of the ancient city of Metapontum.