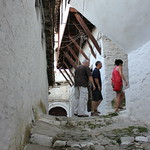 Berat
Things to see at Berat:
A bucket list of the top sights at Berat, ordered by popularity.