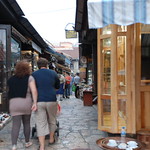 Baščaršija (pronounced [baʃ.tʃǎr.ʃi.ja]) is Sarajevo's old bazaar and the historical and cultural center of the city. Baščaršija was built in the 15th century when Isa-Beg Isaković founded the town. The word Baščaršija derives from the Turkish language. The word "baš" which is "baş" in Turkish literally means "head", in some contexts however also "primary", "main", "capital" and "čaršija" which is "çarşı" in Turkish means "bazaar" or "market". Due to the large fire in the 19th century, today Baščaršija is half the size that it once was.

Baščaršija is located on the north bank of the river Miljacka, in the municipality of Stari Grad. On Baščaršija there are several important historic buildings, such as the Gazi Husrev-beg Mosque and sahat-kula. Today Baščaršija is the major tourist attraction of Sarajevo.