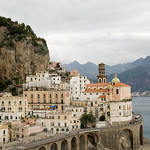 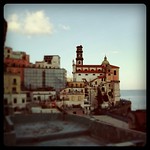 Atrani is a town and comune on the Amalfi Coast in the province of Salerno in the Campania region of south-western Italy. It is located to the east of Amalfi, several minutes drive down the coast.

Atrani has a surface area 0.12 km2 making it the smallest community in all of Italy.

In 2010, the estimated population of Atrani was 913, making it the most densely populated city in the Salerno province.