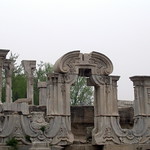 The Old Summer Palace (simplified Chinese: 圆明园; traditional Chinese: 圓明園; pinyin: Yuánmíng Yuán), known in Chinese as Yuanmingyuan (lit. "Gardens of Perfect Brightness"), and originally called the Imperial Gardens (simplified Chinese: 御园; traditional Chinese: 御園; pinyin: Yùyuán), was a complex of palaces and gardens in Beijing. It is located 8 kilometres (5.0 mi) northwest of the walls of the Imperial City and was built in the 18th and early 19th century as the place where the emperors of the Qing dynasty resided and handled government affairs (the Forbidden City was used for formal ceremonies). The Old Summer Palace was known for its extensive collection of garden and building architectures and other works of art (a popular name in China was the "Garden of Gardens", simplified Chinese: 万园之园; traditional Chinese: 萬園之園; pinyin: wàn yuán zhī yuán). Nearby and to the south was an extensive imperial hunting park known as "Nanyuan".

In 1860, during the Second Opium War, as the Anglo-French expedition force relentlessly approached Beijing, two British envoys, a journalist for The Times and a small escort of British and Indian troopers were sent to meet Prince Yi under a flag of truce to negotiate a Qing surrender. Meanwhile, the French and British troops reached the palace and conducted extensive looting and destruction. Later on, as news emerged that the delegation sent for negotiation was imprisoned and tortured, resulting in 20 deaths, the British High Commissioner to China, Lord Elgin, retaliated by ordering the complete destruction of the palace, which was then carried out by British and French troops.