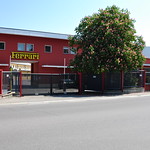 Maranello is a town and comune in the region of Emilia-Romagna in Northern Italy, 18 km from Modena, with a population of 17,165 as of 2013. It is best known as the home of Ferrari S.p.A. and the Scuderia Ferrari Formula One racing team. Maranello was also home to coachbuilding firm Carrozzeria Scaglietti, now owned by Ferrari.

Maranello has been the location for the Ferrari factory since the early 1940s, when Enzo Ferrari transferred operations from the Scuderia Ferrari Garage and Factory in Modena, which had been his base of operations dating back to Scuderia Ferrari's days as an arm of Alfa Romeo, due to bombing during World War II. Initially the factory in Maranello was a base not only for Scuderia Ferrari but also for Auto Avio Costruzioni, the machine tool manufacturing business started by Enzo to tide the company over while Alfa Romeo's ban on Enzo Ferrari making cars bearing the Ferrari name was in force. The public museum Museo Ferrari, which displays sports and racing cars and trophies, is also located here.

Its new library opened in November 2011, and was designed by Arata Isozaki and Andrea Maffei.

Maranello is the starting point of the annual Italian Marathon, which finishes in nearby Carpi.