Les Corts
Things to see at Les Corts:
A bucket list of the top sights at Les Corts, ordered by popularity. 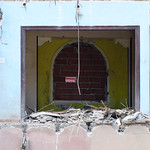 Les Corts (Catalan pronunciation: [ɫəs ˈkorts]) is one of the ten districts into which Barcelona, Spain has been divided up since 1984, numbered IV. It was created in 1897 out of two former municipalities: Les Corts de Sarrià and some parts of Sarrià (the remaining of which went to become the current district of Sarrià-Sant Gervasi). It had 82.588 inhabitants in the 2005 census, which makes it the least populous district of the city.

It is located in the western part of the city, next to three other districts of Barcelona : Sarrià-Sant Gervasi, Eixample as well as Sants-Montjuïc, and two municipalities of the Metropolitan Area of Barcelona: L'Hospitalet de Llobregat and Esplugues de Llobregat.