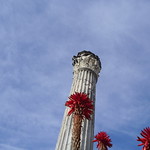 Carthage
Things to see at Carthage:
A bucket list of the top sights at Carthage, ordered by popularity.

The city of Carthage (/ˈkɑːrθɪdʒ/; Arabic: قرطاج‎  Qarṭāj) is a city in Tunisia that was once the center of the ancient Carthaginian civilization. The city developed from a Phoenician colony of the 1st millennium BC into the capital of an ancient empire. The area of Carthage was inhabited by Berber people who also became the bulk of Carthage's population and constituted a significant part of its army, economy and administration. Native Berbers and settling Phoenicians in Carthage mixed in different ways including religion and language, creating the Punic language and culture.

The first civilization that developed within the city's sphere of influence is referred to as Punic (a form of the word "Phoenician") or Carthaginian. The city of Carthage is located on the eastern side of Lake Tunis across from the centre of Tunis. According to Greek historians, Carthage was founded by Canaanite-speaking Phoenician colonists from Tyre (in modern Lebanon) under the leadership of Queen Elissa or Dido. It became a large and rich city and thus a major power in the Mediterranean. The resulting rivalry with Syracuse, Numidia, and Rome was accompanied by several wars with respective invasions of each other's homeland.

Hannibal's invasion of Italy in the Second Punic War culminated in the Carthaginian victory at Cannae and led to a serious threat to the continuation of Roman rule over Italy; however, the Romans gained the upper hand by invading Africa and defeating Carthage at the Battle of Zama in 202 BC. Following the Third Punic War, the city was destroyed by the Romans in 146 BC. However, the Romans refounded Carthage, which became the empire's fourth most important city and the second most important city in the Latin West. It later became the capital of the short-lived Vandal kingdom. After its conquest by Belisarius, it remained one of the most important cities until the Muslim conquest, when it was destroyed a second time in 698.

The ancient Greek philosopher Aristotle wrote extensively on Carthaginian politics, and he considered the city to have some of the best governing institutions in the world, along with those of the Greek states of Sparta and Crete.