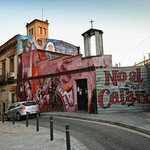 Can Vies (also known as Centro Social Autogestionado Can Vies) is a building located in the Sants neighborhood of Barcelona. Can Vies was built in 1879. It has been squatted ever since 1997 when a group of youths occupied it and began using it as their social and cultural center. The building is under the ownership of Barcelona's public transport operator Transports Metropolitans de Barcelona. In late May 2014 riots had broken out in an attempt to stop the eviction of squatters.