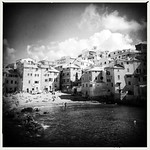 Boccadasse (Bocadâze in Genoese) is an old mariners' neighbourhood of the Italian city of Genoa. It lies at the eastern side of the Corso Italia stroll, the main sea front stroll of the city of Genoa, at the feet of Via Aurora, a typical Ligurian narrow street ("crêuza").

The village of Boccadasse attracts tourists. It is enclosed in a narrow bay, at the eastern side the cape of Santa Chiara with a castle (a new building in the style of a medieval castle), on the western side the rocks, and in the middle the tiny cobblestones beach where the seamen's small boats rest.